Why are Tier 6 items "drop only" and not crafted?? 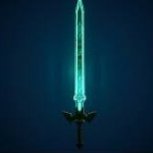