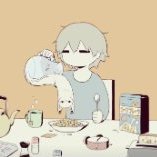 By Almond Milk,
May 5 in Mods