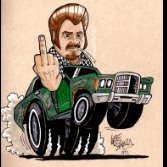 By Horatio Chachi,
May 5 in Pimp Dreams